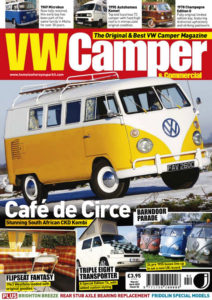 The Champagne Edition special models were launched in 1977 as a promotional campaign in America to mark production of 1 million Golfs (known in US as The Rabbit!), and saw a limited production run of specially painted and spec’d models (including a Microbus) sold exclusively in the USA. Such was the success that, in Spring 1978, a second version, the Champagne Edition II, was made available.

Produced in limited numbers for just a few months these are very rare models, and the lovingly restored Microbus version featured here, finished in its original Champagne Edition colours and fully complete with its original upholstery, trim and optional extras all intact, is therefore something a bit special. 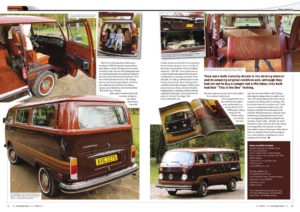 Exterior wise it is finished in the original Date Brown under Fox Red colour scheme, with Fox Red Wheels and chrome bumpers and the distinctive colour co-ordinated side striping. Owner Shaun Knight says, «Before we actually realised the rarity of this bus (we didn’t actually know it was a Champagne Edition), we were trying to decide what colour to paint it. But after some homework we realised what we had actually got; it then became clear that we would have to go back to stock colours, along with the stripes to do the bus justice.» The distinctive exterior is matched by a luxurious interior finished in Sienna Brown faux leather with corduroy centre panels for the seating and colour co-ordinated carpeting and all the normal black or dark grey finish plastic parts such as the dashboard, steering wheel, wiper and grab handles, rear view mirror, hot air outlets, gear knob, window winders, armrests etc are exclusively finished in Saddle Brown. 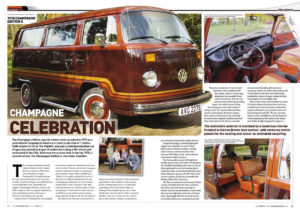 The bus was discovered by Frank Grote and his partner Lore, of Frank’s VW Busparts, the Westfalia Specialists, who were on one of their regular parts and van hunting trips to California when, on the day before they were due to depart to return to the UK, they came across an advert for this bus, located in the Berkley Hills of San Francisco.

The Bus was parked in a driveway, behind a fence, invisible from the street, and was full to the roof with boxes and bags of clothes and private possessions, a true shed. The van was originally owned by a Chinese man, who bought the bus new and used it as his daily driver on a commute from San Francisco to San Jose. It served well until there was a problem with the engine, approx 12 years ago, diagnosed as a possible burnt valve in one head. The van was consequently parked up, pending repair but ended up just sitting, becoming more and more useful as storage shed. The nephew showed them round it and, despite the boxes of junk, they could see the interior was basically in immaculate original condition and had been well cared for. Its history was fully documented including all invoices for servicing, repairs etc, full service history, bill of sale and even the first ever fuel receipt attached to a piece of paper stating the fuel consumption on its maiden trip!

They struck a deal, had it trucked to a local VW repair shop with whom they work very closely when in San Francisco, and had the engine and brakes were repaired, prior to it being shipped to the UK. The bus was then sold on to Les at Bullibarn, who had started work stripping back the paint when Shaun and Hayley Knight happened to pop in! »

The distinctive exterior is matched by a luxurious interior finished in Sienna Brown faux leather, with corduroy centre panels for the seating and colour co-ordinated carpeting.

They were returning home following a viewing of a RHD Australian import Westy and called in on the off chance to see what Les had for Sale. By now the Champagne bus was partially prepped for paint and masked up in his spray booth ready for primer. They were both instantly drawn to the striking interior and its amazing original condition and although they had set out to buy a camper not a Microbus they both had that “this is the One” feeling.

Shaun starts with the restoration 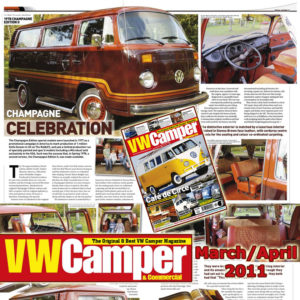 Although it was basically ready to prime and paint up. Shaun had always intended to bare metal any bus that he was going to buy to ensure he got to see every inch of the bodywork and deal with any hidden surprises. With 20+ years experience as a panel beater and painter he was quite comfortable in carrying out all the work himself. The only panel required was the battery tray and no other welding at all and Shaun basically stripped all the paint, pinned out any dents, pruned, blocked, and painted It. Deciding to stick with the original Champagne colours and look to preserve the bus’s heritage. Thin band whitewalls and ally side step accessories have been added for a period custom look.

After using the bus for a few months the engine gave up the ghost, so Shaun fitted a NOS 1800 engine, along with twin 40 Webers and a new clutch, The rear seat has also been fitted with Z hinges allowing a folding action to make a bed. This turns the people carrier into a basic camper and. along with an awning, they have done several overnights in it. Funky colour co-ordinated curtains from VW Camper Curtains harmonise perfectly with the Microbus Interior. This year they intend to go camping much more and are investigating a European trip for the summer Shaun adds. “Initially› we never intended to show this bus, but after being encouraged by a few people, we have thoroughly enjoyed showing at a few shows this year and have been lucky enough to win some trophies, including its recent outing to Bus Freeze.” 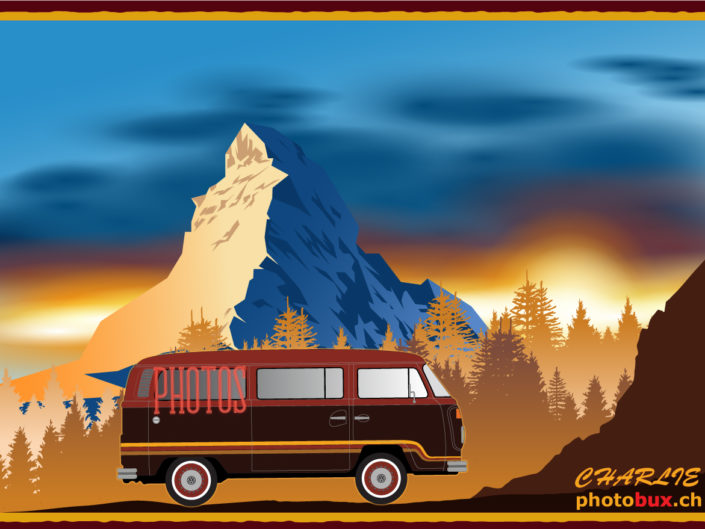 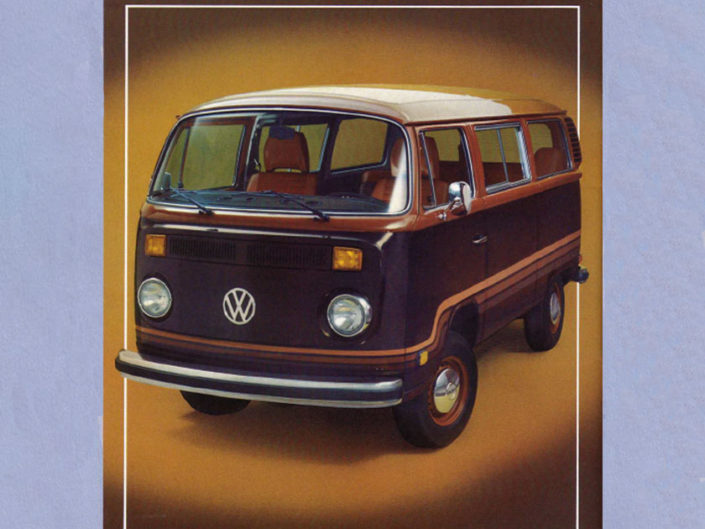 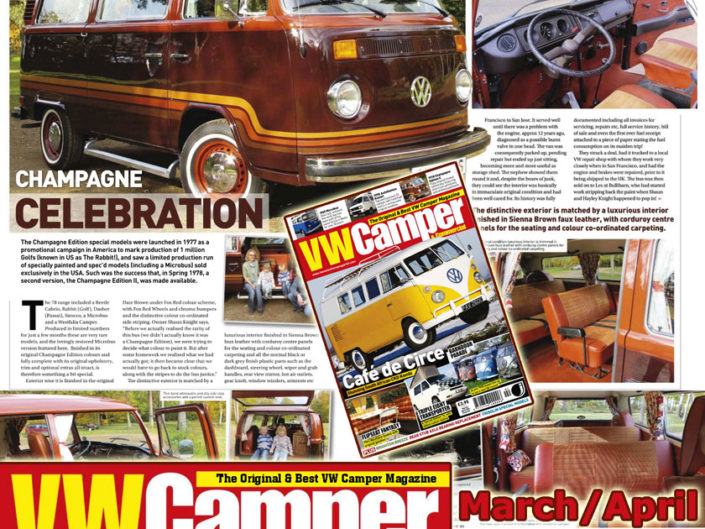 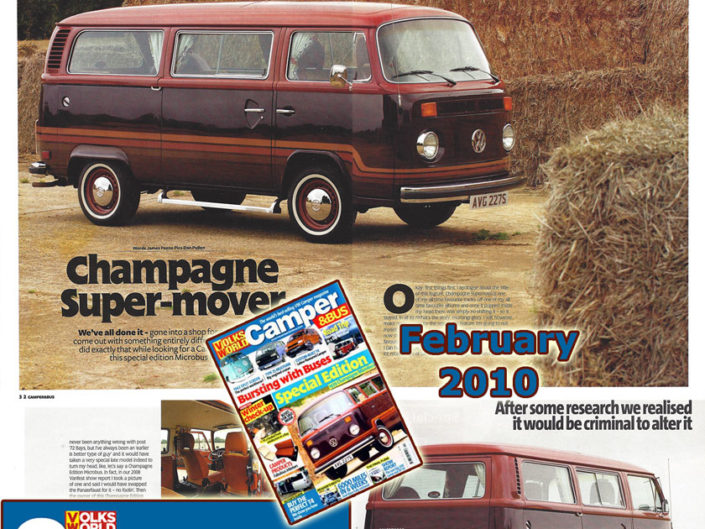